I love talking about Harry Potter.

Whether I’m screaming about the plot, the characters, my ships, the movies, or the fact that I really want to get my Hogwarts acceptance letter, it’s pretty much a guarantee that I’m always talking about it in one way or another.

In typical Olivia fashion, I’ll be doing that yet again on this post. 😉 Today I’m going to be talking about a character who I think is slightly underappreciated despite being the protagonist of the entire series- Harry Potter himself.

I know, I know. On the surface level, it seems like Harry does get a lot of appreciation, but when I really started to think about it, I realized that I’ve never really heard anyone say he was their favorite character. More popular answers are Hermione, Ron, and even Snape or Draco.

This makes me sad, because Harry Potter is one of my most favorite characters of all time. He is my small, sassy, lovable child and I will protect him with my life. So, I have put together a list of reasons that Harry Potter is my favorite character in Harry Potter. Disclaimer: There will not be explicit spoilers in this post, but there will be references to occurrences throughout the series. Without further rambling , let’s get into the post!

I mean, if I were an ordinary boy (who sometimes had not-so-ordinary things happen to me, but for the most part, my life was typical) and then one day a giant man named Hagrid came to tell me I was magical and, oh by the way, I’m an international wizard celebrity and everyone knows me, I don’t know how I’d react.

After his initial shock, Harry accepts his role extremely well.

Throughout the series, he always steps up to the challenge of being The Boy Who Lived. He shakes the hand of strangers, he stands up to Voldemort, and when he hears what his fate is, he doesn’t back away even though he had no choice in this.

MY HEART. Harry is just so pure and sweet and he takes on the role of Harry Potter so well, it makes me want to hug him all the time.

2. He is such a realistic and relatable character.

I touched on this a little bit in my last Harry Potter post, but Harry is genuinely one of the most realistic characters I have ever had the privilege of reading about.

He has no idea how to talk to girls, first of all. He’s completely clueless and relies on Hermione for advice (which, of course, confuses all the other girls because they all think he likes her). I absolutely love how J.K. Rowling didn’t portray him as someone who had an easy time making conversation with girls, or anyone else, really, because it just makes him so realistic and relatable.

Another time he’s realistic is when he has his…let’s call it his whiny phase in the fifth book. I’ll admit, I did get a tiny bit frustrated, but it was completely understandable. In fact, it would have been unrealistic if he had never reached a point where he just couldn’t take everything anymore.

Being Harry Potter is a lot of responsibility that he didn’t ask for, and he’s not an automaton or some kind of golden boy- he’s human, he’s a teenager, and it makes sense that he would have, well, a few moments of weakness. And I love him even more for it.

3. He’s so incredibly kind to everyone.

Half the time when I’m rereading the series, I’m just a puddle of happiness because Harry may just be the kindest and purest soul out there.

I can list out multiple instances throughout the series that show just how sweet he is, and you know what? I’ll do that now. 😉

I could go on, I promise. But I’ll stop here because I think I’ve given ample evidence of how pure, sweet, and kind Harry Potter is.

Agh, look how little my babies are. *resolidifies from puddle of happiness I melted into*

I love how they grow up together, I love how Harry saves her when they’re just smol little children, I love how they watch each other date other people before realizing their real feelings, I love how Ginny doesn’t need Harry to be strong, but most of all I love the epilogue in the last book.

All right, my rant about Harry + Ginny is over, but my rant on why Harry-in-love-with-Ginny is utterly adorable has not even started yet. Here are a few pins that I found on Pinterest, and I think they pretty much sum up my feelings. 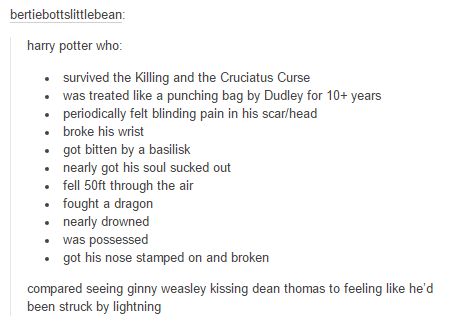 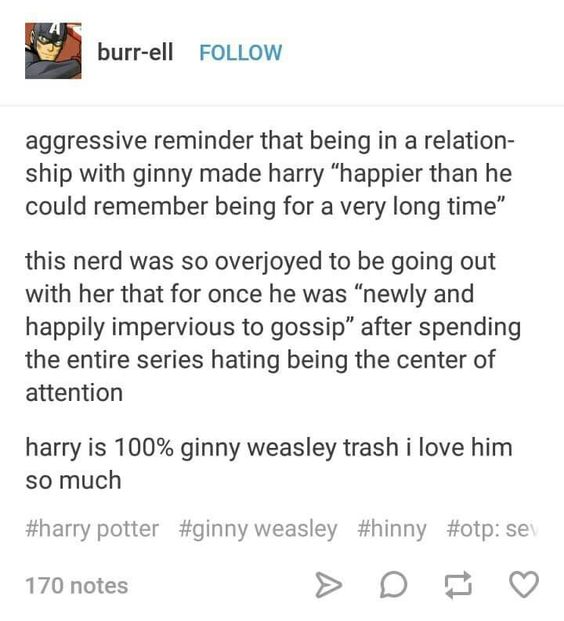 THESE ARE SO SWEET, and so true. I noticed the relationship between Harry and Ginny when I reread the books this past summer, and it was honestly such a healthy relationship and the way Harry treats and adores Ginny just makes me love him even more.

5. He just wants to make his parents proud.

Harry is constantly thinking about his parents and what he can do to make them proud. This makes my heart very, very happy.

I love reading about characters that love and respect their parents, because that is something that’s really important to me. When characters always go against their parents’ wishes and just overall dislike them I’m just like ….?

But Harry Potter isn’t like that. Even though he doesn’t have any memories of his parents, he tries to live like he thinks they would have wanted him too, and I can’t describe how happy that makes me.

6. He never considers abandoning the wizarding world in its time of need.

The wizarding world needed Harry Potter. Without him, Voldemort could never be defeated. And did he once think about leaving? Did he ever consider leaving all his problems behind? Did he abandon them in search of safety?

I believe the answer is no.

That just makes me really proud of him, and it shows how admirable his character truly is. It says a lot that he willing put his life at risk after knowing about the wizarding world for less than year. And he continues to do so again and again. I love him too much, okay?!

I can’t imagine that being Harry Potter’s friend would be easy.

He’s a celebrity, so everyone will always be in his business and consequently in yours. He’s always going off to save the world, so it’s likely your life will be in danger. Not to mention that you’d guess he’d be stuck-up and arrogant.

Yet, Harry is such a good friend.

I love him for that.

I could go on and on about Harry Potter for ages, but I think it’s time this post come to close. 😉  I love writing posts about Harry Potter because I truly have so much passion for this series and these characters- this post was written in just one sitting, because the words kept flowing out of my fingertips and I had absolutely no loss of things to say.

If you made it this far, cheers to you, and thank you for following along. I hope you enjoyed my rant of why Harry Potter is my favorite character, and let me know if you’d like to see even more Harry Potter posts in the future. Wishing you a magical day!⚡️

Who is your favorite character in Harry Potter, and why? Do you love Harry as much as me? What is your Hogwarts house? I’d love to chat with you all in the comments.

Photo by Jessica Fadel on Unsplash >> credits for the image in my featured image, many thanks to the photographer!

59 thoughts on “Why My Favorite Character in Harry Potter is Harry Potter // ft. Screaming, Ships, & Many Gifs”